SHEA AND ITS ORIGINS 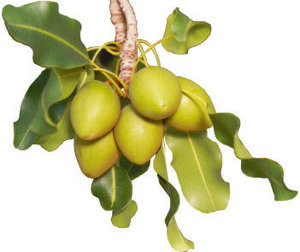 The shea tree, whose scientific name is Vitellaria paradoxa is a tree that grows in the Sahelian climate which is characterized by two seasons, a brief summer humid season and very long dry season. It grows naturally and without pesticides. This tree can be found mainly in the West African countries such as Burkina Faso, Senegal, Mali and even Guinea. He produced a fruit that is also called shea it is presented in a form of fleshy berry that includes a nut that is used to produce the shea butter. The first fruits appear after 15 years and its lifetime may reach 3 centuries. In adulthood, that is to say, 30 years, the shea produces about 20 kg of fruits, which will give 1 kg of shea butter.

The ripe fruit of the shea tree are collected between May and September by the village women grouped into the cooperative. The fruits are selected and washed by hand. They are cleared of their pulp to keep only the nut shea which is also called almond. The nuts are then boiled and dried in the sun and shredded. The almonds, which contain up to 50% fat, are then ready for the transformation into butter. The nuts are crushed with a pestle in a large mortars. In order to obtain a thick paste it is mixed with water that is then stirred by hand by the women. Then the liquid is heated to remove the impurities and to trace back the oil shea. It just have to recover shea oil and let it cool to form blocks of pure shea butter.

Les Roses de Marie, privilege the traditional production method to offer you all the repairing properties of shea nuts for the body, face and hair.

Excellent source of Vitamin A, D, E, F and latex it remains an excellent moisturizer and conditioner for the skin and hair and has many healing properties, there are a few:

Be beautiful, be natural!